Mezmeratu, from Jacob Jazz, is a platform-hell adventure with some rogue-lite elements put in. Discover a strange world full of surrealistic horror villages, stinky talking characters, impossible rogue platforms and…a giant fish kidnapped inside an owl’s beak. Trust me, that’s not the weirdest part of this game.

The First thing I want to touch on is Jacob’s mind. Like, Jacob, are you okay, man? Do you need someone to talk to? I would say this is something you would see in a fever dream, but it’s really like an acid trip gone bad. Grotesque creatures and a mix between 2D backgrounds and full-motion 3D backgrounds where nothing is cohesive.

This game really reminds me of Ghost ‘n Goblins, if anyone remembers playing that nightmare. Luckily, you are given check points and lives to help you get through the levels, but they won’t last long and if it’s game over, you go all the way back to the beginning to try again.

Then there’s the music. Oh, the music is great if you can drown out the screams of what sound like women and children from your brain, and you might be able to do that for how many times you will die in this game.

Mezmeratu’s mechanics are top class. You always want tight controls when it comes to a platformer and you will enjoy jumping and killing enemies throughout this game. I’ve died many times in this game and I couldn’t blame it on anything else but my own mistakes.

The double jump, wall jump, and midair controls are responsive. Combat is a little finicky. I’ve tried to swing the sword in one direction only to have it swing the other way and if you are playing on a controller, I find the down button slam is very easily triggered from the thumb stick.

No issues with the keyboard, so that may be the best way to play. Another interesting feature is the way the levels change. Each time you die the level will change. Sometimes small ways, sometimes the whole landscape will be widely different. I’m not sure if its randomly generated or if it takes your progress and adds a value to it to determine how the layout should be.

If it does do this, it is taking inspiration from Demon’s Souls. If you didn’t know, Demon’s Souls had a funny number system, and the more you died, the harder the game became, and the less you died it became easier.

Seems strange, but that’s what they did, and I wonder if Jacob has done the same thing because it seems whenever I make long stretches without dying, the level seems less complex or difficult, but if I die three or four times in one area, it’s like the world hates me and wants me to spend eternity in this one spike trap.

Another part which I’m not sure if it’s a bug or a feature at this point, is when you die and return to the checkpoint, there are times where your health is only replenished by half instead of the full 100% and damage from enemies seems to be a variable as well.

Sometimes the enemies will take just a sliver of your health and on the next run-through, the same type of enemies will almost damn near kill you. Again, I don’t know if this is a bug but I have a feeling this is intentional.

Level design is also really weird but well-put-together for being jumbled every time you die. The first stages are your tutorials on how to use the double jump, head jump, and wall jump. Trust me, you’ll see this level a lot in the beginning. And I’m saying the first stages because they look like the same area, but I can’t read this map and figure out where I am at on it.

The next stage has you in this jungle-like area where gravity can be flipped, which is cool but hurts my brain to the point that I’m surprised I didn’t get a nosebleed. After that, from what I have seen, is a variation of these mechanics and new enemies that will kill you over and over again.

A tower climb almost reminding me of Ice Climbers, an underwater level that you are in for about five minutes, and an ice level with slippery platforms that reminds me of Mario 64. That’s as far as I got. I just kept dying in this 3D fish level. I don’t know if I’m close to the end or just scratching the surface.

I can’t stop playing it though, due to its oddity and fun platforming. I walk away from it and fifteen to twenty minutes later I’m back at it, like a crackhead needing another fix, just trying to get further. The trailer video has a joke ESRB rating on it that says use of drugs. I believe it.

This game is like a bad habit that will destroy your life and have your wife and kids walk out on you because you’re neglecting everything; that’s what this game will do to you.

Okay, maybe not that severe, but this is a great game and it kind of flew under the radar for a lot of people. It may have been overlooked due to the imagery and people thinking it’s just a game trying to be edgy. That may or may not be true, but this game is a difficult, bloody, anger-inducing good time, and I don’t think you should pass it up.

This game is $8, I have almost 3 hours in this game, and it’s still a whole lot of fun. Don’t sleep on this game.

Check out Indie Direct on YouTube, the host of the embedded video!

Do you like scary games? Check out our Top 5 scariest Halloween games, you won’t be disappointed! 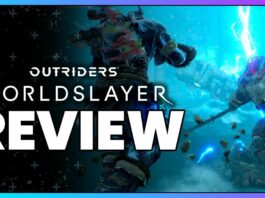 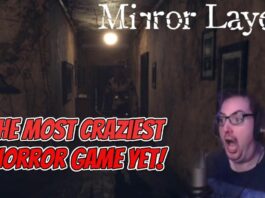 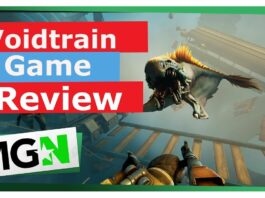